The Trump presidency has been one of the most tumultuous and controversial in American history. Each day, something increasingly farcical happens, and the real world comes closer and closer to being a South Park satire.

The internet, of course, has taken notice of this and provided a slew of memes, showcasing every poor decision and misstep the president has taken. Here are fifty of the many memes pointing out how increasingly disastrous and surreal the state of the country is getting.

Denizens of Twitter  took notice when Trump made Betsy DeVos, a Michigan Republican with no background in education, his Secretary of Education. DeVos's nomination was a controversial one to begin with—opposed by Democrats and teachers, yet praised by proponents of school choice and her fellow Republicans, DeVos was confirmed by a 51 yes to 50 no vote, with Vice President Mike Pence breaking the tie in her favor.

DeVos's numerous public gaffes, such as her comments on historically black colleges being a pioneering example of school choice (ignoring the fact that many of these colleges came about as a result of forced segregation), and her comments regarding the American Federation of Teachers' survey showing their members felt a lack of control over their classrooms while ignoring the fact 86% of the 5,000 educators surveyed in the same survey felt DeVos had disrespected them, have cemented her position as a polarizing figure. The below meme takes a quote from Trump claiming to love the “poorly educated”, saying that DeVos will ultimately grant this wish as she will cause education standards to go down. 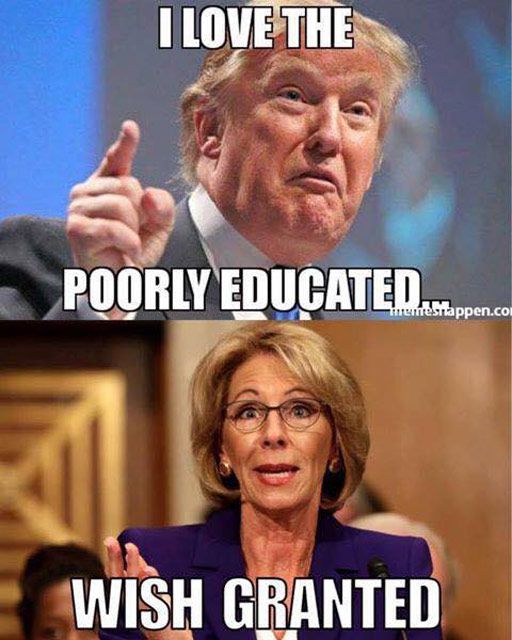